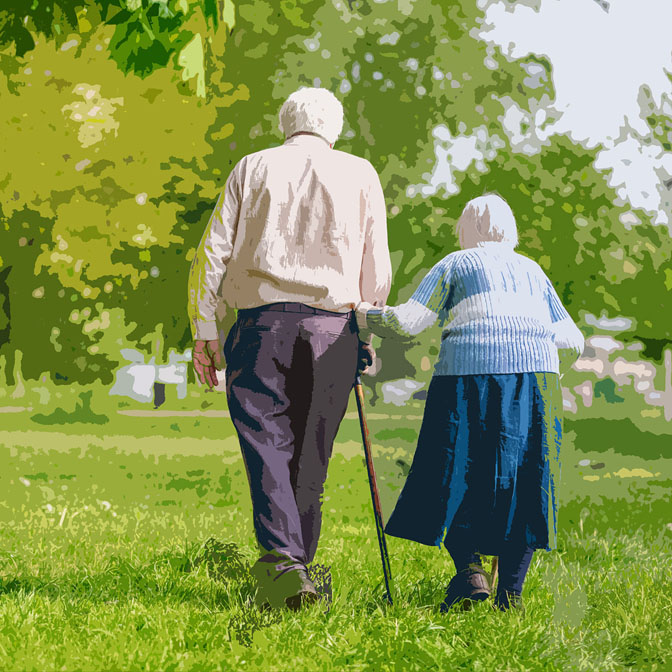 Everyone will experience some form of stress, grief, or mental health issues throughout their lives. Geriatric counseling and later in life therapy is proven to be beneficial for those struggling with the pressures of aging. Though our “golden years” are a beautiful time, they can also bring about stress from loss, grief, or the physical and mental changes that come with age. If you or a loved one need help during this transition into a new stage of life, contact Handel Behavioral Health now and speak with a trained mental health professional who specializes in geriatric counseling and later in life therapy.

What is Geriatric Psychology?

Geriatric psychology specializes specially in those mental health issues that affect individuals as they advance to their later stages of life. The focus of study for geriatric psychologists are various skills and abilities that decline as one gets older such as:

Their research has helped to discover the specific ways that changing conditions that someone experiences as they get older impact their emotional and psychological well being especially in such areas as: loneliness, depression, general dementia, Alzheimer’s disease, vascular dementia, and Parkinson’s disease.

The geriatric therapist observes neurological and physiological processes of older adults’ brains as well as how they impact changes in behaviors and daily functioning. This allows the therapist to provide care and treatment that addresses the needs of the elder client. Specialized treatment for elderly individuals can include:

A geriatric therapist specializes in the treatment that specifically addresses the mental health problems associated with the aging process as mentioned above. But these therapists also help an individual and their families cope with these issues and address strategies to help the elderly individual and those who care for them, adjust as best as they can to a gradually changing condition.

We often think of grief being associated with the loss of a loved one. This can be particularly true when an elderly person loses a spouse. When someone who has been their primary relationship for most of their adult life is no longer part of their life, the resulting loneliness can also result in helplessness, hopelessness, decreased motivation and other symptoms of depression. However, grief may not only be a product of losing someone close to us. It may also result from the loss of skills and abilities, both mental and physical, that we once possessed. As a result, we may lose our sense of efficacy, feel incompetent and useless.

Studies have reported that 14 to 20 percent of elderly adults have significant mental health concerns. It has been estimated that by 2030, adults over age 65 will comprise over 20% of the US population. These two facts suggest that as “Baby Boomers” enter into their elderly years, there is a growing need for mental health professionals who are specifically trained and skilled in the areas of geriatric psychology and psychiatry.

The many changes that elderly people go through, such as decreased income, loss of loved ones with changes in family structures, changes in living situations and decreased social communication, all can lead to increased loneliness. Research has shown that loneliness correspondences to problematic medical conditions such as cardiovascular issues, arterial stiffness, elevated blood pressure and decreased blood circulation. Studies have also cited that the risk of Alzheimer’s was twice as likely for individuals identified as lonely.

As older adults face increased debilitating conditions the likelihood of depression increases as well. Decreased physical health, declining cognitive ability and decreased social functioning have been associated with self neglect and increased risk of suicide. While the symptoms of depression may be exasperated for those individuals who had suffered with depression from a younger age, stressful life events associated with getting older can also result in the development of late-life depression. Depressive symptoms increase the individual’s risk of cognitive dysfunction, irritability and fatigue.

Dementia refers to a range of declining cognitive abilities and the associated mental and medical symptoms such as loss of memory, inability to learn new tasks, difficulty maintaining attention, and struggles implementing basic thought processes. These impairments make it increasingly harder to perform day-to-day activities that, at one time, were conducted routinely. One specific type of dementia is vascular dementia which is the result of the body’s difficulty supplying blood to the brain. This often happens following a stroke. While dementia itself is not one specific disease, it may be a symptom of Alzheimer’s disease. Research has shown that Alzheimer’s disease accounts for 60 to 80 percent of all dementia cases. The subtle onset of Alzheimer’s, along with a long, gradual worsening cognitive decline, make this form of dementia particularly problematic for the patient’s mental health. These symptoms often include:

Parkinson’s disease is a debilitating disorder that primarily affects the motor system and disrupts one’s movements in various ways such as slower gestures, stiffness, impaired balance and coordination, and tremors. As symptoms of this disease progress, deficiencies in the sensory systems that commonly produce a type of dementia. The significant decline in both the client’s physical and cognitive greatly impact the client’s mental health as well.

Elderly people are often reluctant to seek help from a psychologist, psychiatrist or other mental health therapist. In the past, needing help with mental health disorders carried a stigma that often generated shame and embarrassment. Though a lot of work has been done to overcome this stigma, many older adults still remember the sense of disapproval and the discrimination that those facing emotional and psychological distress faced. Therefore, they may hesitate to talk about what they are experiencing and the emotions associated with those experiences.

Seeking Help for the Elderly Adult

While the aging process can produce serious conditions that have a significant impact on someone’s mental health, a therapist trained and experienced in the needs of older adults can greatly help an individual cope with what they are experiencing. They can also be an aid to those who are caring for the elderly individual by identifying how changes in cognitive and emotions relate and in developing strategies to cope with these changes.

With effective treatment, elderly individuals and their loved ones will benefit from the support needed to adjust and adapt as best as possible in ways that maintains one’s dignity and self-worth. Contact Handel Behavioral Health today and find a geriatric counselor in Massachusetts!